"A child with the Tyrant Eyes who has never seen the sunshine of a world without ruin."
—Description

Alstromya is a DLC character in Dissidia Calamitas Infinita, originating from Kings of Strife II. The only child of The Crystal Savior before he gave his life to save the world, she lives in honor of his memory, but shuns the fame that comes from being related to him. A little maladjusted and a lotta violent, she roams the Lower Lands, living life on the lam in the icy landscape and crossing swords with any who comes her way. Before long she meets Sanadus Sestrum and the two begin a journey to bring peace to the ruined land.

In DCI, Alstromya fights on the side of Twilight.

Alstromya has a striking resemblance to her mother. She is of medium height, with long straight violet hair and naturally red eyes. Her default outfit depicts her in a faded blue shirt with a long front and tail with two brown belts at her waist. On top, she wears a long white fur coat, and has tall brown fur boots. Alstromya's first alternate costume Silver Spectre depicts her in a basic outfit of tight black leggings, black snow boots, and a long black shirt, with her fur coat over the ensemble and her hair down. For her second alternate costume, Red-Eyed Slayer, she wears a long form-fitting black dress that opens beneath her navel to reveal a short white skirt. No coat is present in this outfit.

Her first DLC costume, Eternal Surveyor, depicts Alstromya in her normal attire with a long silver cloak over her clothes, to mimic her stint in the Eternal Corps. Her second costume, Princess Kornelia, puts her in a full-length lilac dress with curled hair and a wealth of gold accessories. 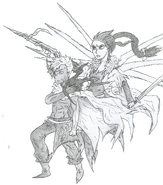 Default alternate render
Add a photo to this gallery

Alstromya
Epoch Swordmaster – Complements her dual swords with her control of the ruined earth's glaciers.

As the Epoch Swordmaster, Alstromya battles with a thin blade, a rusty old gunblade, and her own powers over the element of ice. By design she is a stance fighter that can excel at physical rushdowns or magical bombardment from a distance. In both stances she is speedy and has access to ice-related moves. Though she has an abundance of brave attacks and links to HP finishers, she is left wanting for standard HP moves, and has little in the way of defense. It is possible to exploit her speed and myriad of attacks to string together some of the longest and most effective combos in the game, but the combos tend to be quite intricate and can be very difficult to pull off.

Alstromya's two forms are Futurism, which uses her longsword and close-range ice attacks, and Retrograde, which uses her gunblade and her long-range ice attacks. She can switch between the two by pressing R+L. Her battle model changes slightly with each stance; in F. Form, Alstromya wields her sword in one hand and keeps the other at her side, and stands with a bit of a slouch. R. Form has her holding her gunblade with both hands, she stands at full height, and a slight ice-blue aura is visible around her.

Alstromya's EX Mode is Freedom. In her EX Mode, Alstromya fully accepts and masters her Crystal powers, and as a result she is engulfed in a light golden aura and her eyes grow ghostly orange. In addition, translucent icicle blue skeletal wings form behind her, gifting her with a new ability - Evolution of the Tyrant. This gives her greatly increased speed, more invincibility frames and distance traveled in all dodge animations, and the ability to glide in midair by holding

. She also gains the Frozen Touch ability, which imbues all of her attacks (that don't already have the effect) with a 5% chance of inflicting Freeze on each hit, as well as Evolution Eye, which allows her to instantly cancel out of any attack without any recovery by pressing R+

. Each use of Evolution Eye consumes 5% of her EX Gauge, but the use of it cannot end the EX Mode.

Alstromya's EX Burst is Evolved Barrage. Alstromya starts the attack by attacking the enemy once with each of her blades before slashing them into the air with a third slash. Now floating with the power of her wings, Alstromya envelops the enemy within a tower of solid ice before coating and extending her swords with ice. She strikes the enemy's place in the tower with the powerful weapons nine times before moving backwards, spreading her wings to their fullest span, and firing a beam of pure frozen energy at the enemy from her empowered gunblade. If this attack kills the enemy, the tower breaks and collapses onto the enemy instead of simply disintegrating at the end.

Retrieved from "https://dissidiacalamitasinfinita.fandom.com/wiki/Alstromya?oldid=35477"
Community content is available under CC-BY-SA unless otherwise noted.